I am about to complain about an anonymous person's behavior, but first, let me express my acute discomfort in making the complaint public. It feels peevish and mean of me considering that this person is extremely caring and thoughtful in a great many ways that I am not.

Once upon a time, I accepted an invitation for a Thanksgiving dinner. Following the lovely and congenial meal, I silently witnessed my hostess throw most of the remains of our feast into her trash. The many cakes and pies were saved. But following the meal, she seized the serving bowls loaded with mountains of perfectly good vegetables, stuffing, and a mostly intact turkey carcass, with loads of visible meat remaining on it, and with a robotic, practiced motion, dumped all of this food into her kitchen trash can.


This was not leftover food from our plates. It was untouched food from the serving trays.


I don't eat meat, but the idea of all that sacrifice being disregarded—perhaps especially for a vegetarian—shocked me to my core. Think of all that energy: labor, water, feed, fuel, processing, transport, packaging, unceremoniously, ungratefully dumped into a kitchen trash can to fester in a landfill. It still sears my memory.

She was just caught in a habit. Everyone has funny habits. I am sure I have many that are annoying to other people. Most people I know will save leftovers after having guests over, and offer some to their guests before they go home. This was an anomaly.

My mother taught me relish using everything. It is truly a joyful practice.
She loved to talk about how after every long winter, her pioneer ancestors longed to go out and gather spring greens to create tonics for their anemic bodies! All the wistful stories about my great-grandparent's herbal tonics probably influenced my desire to study plant natural products and to later write a book on herbs. The joy of foraging, which I wrote about in an earlier post, stems from this longing to use what we are given, to not let it go to waste.

My mom taught me how to eat the so-called "cores" of apples and pears.


Do you know how to eat broccoli stems? Or beet greens? They are delicious and nutritious! I actually eat the cores of apples and pears, spitting out the seeds. I used to let myself get ridiculed for my abnormal fruit-eating style until I learned there are lots of other secret core-eaters out there. There is no reason not to eat an apple "core", which actually doesn't exist. And everyone knows that the peels of fruits and potatoes and sweet potatoes are where most of the nutrients are, right?


Apple cores are perfectly tasty, with just a tad more fiber. Our ancestors probably ate ten times more fiber than we do, and fiber is the first thing that I'd recommend we need to get more of in any diet. (Apple and pear seeds won't hurt you unless you try to eat mountains of them; they do contain cyanogenic glycosides such as amygdalin that gives you a slight almondy aftertaste if you accidentally bite into a seed. I have a PhD in medicinal chemistry; trust me. Don't worry about swallowing some apple seeds, but don't eat buckets of them, either, because that would just be weird and difficult.)


Poverty is a great teacher. Growing up with her parents teaching English to the Geechee-speaking Gullah islanders, my mom's family was treated as "colored" by association, as they lived with the islanders. They were passionate advocates for equal rights and education for all. She remembers having to use "colored facilities". Her family went through periods with "nothing to eat but popcorn and potatoes". Cheap, unadorned, leftover popcorn was used for cereal, along with any other cooked grain, like polenta, or barley. It makes sense. Popcorn is a whole grain, and I've enjoyed using it in place of a breakfast cereal on occasion. Popped corn can also be used for soup or salad croutons. If a grain is not sanctioned by the almighty food companies and does not does not come out of a plastic bag inside of a box labeled "cereal", should we really be too scared to use it for our breakfast cereal? What has become of us? (Almost every single processed cereal has added sugar, too. Society is in the midst of a diabetes epidemic that the world has never seen before. Do we really need the drip drip drip of all that added sugar?)


My husband knows to save the remaining crumbs from a package of whole grain cereal or crackers that he finished. I throw the crumbs into casseroles to absorb excess water. At the very least, I give them to the active squirrels and birds eyeing me hopefully through my kitchen window. 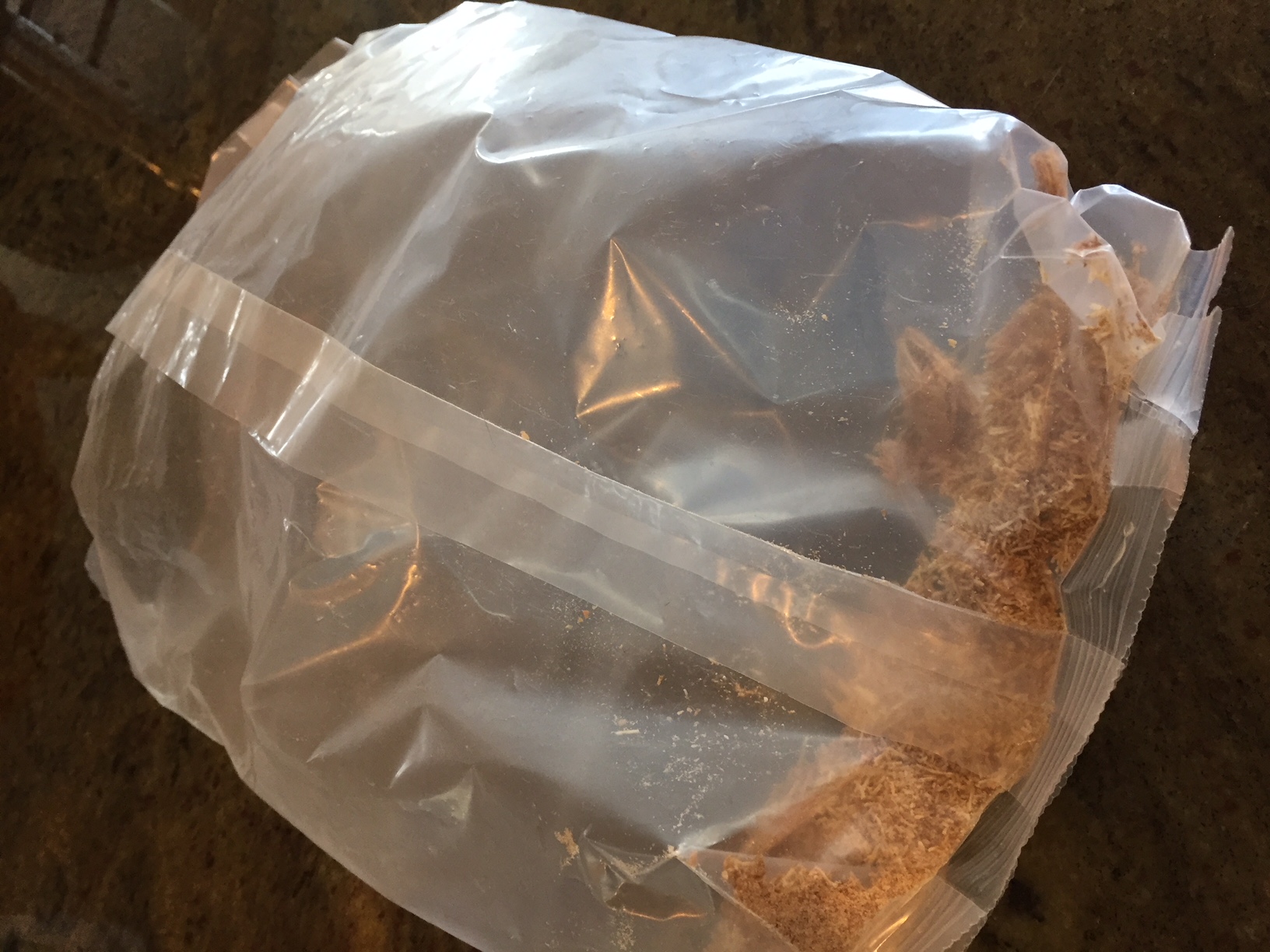 This bag was left out for me on purpose. My thoughtful husband knows I want to use his leftover cereal crumbs!


I watched my mom boil the bones and gizzards of any poultry she cooked. I watched her suck the marrow from bones, with her explanation of its nutritional benefits. There was always something that could be used in more ways than you thought. It was clever and thrifty. It showed appreciation for what you were given.


If anything was past due, she buried it a special place in our backyard. She playfully called the area her Garbage Garden. "Because a rind is a terrible thing to waste," she punned. As a tot, I was tickled by the silly-sounding concept of keeping a Garbage Garden. My mom has a Garbage Garden! I told my friends. Our Southern California Garbage Garden produced mysterious plants. I couldn't wait to see what they would become! Accidental squash were the norm. One season we thrilled to discover a spontaneous avocado tree that fruited for years to come.


A garbage garden is a magical thing. If you feed the earth, the earth will feed you. Compost helps feed the microbiome of the earth, which feeds the microbiome of our bodies. What we keep learning from nature repeats the theme that a diverse array of organisms keeps systems in check. (Blow drying your earth with deafening leaf blowers performs the opposite task of sterilizing your soil, priming the earth for unhealthy monocultures both microscopic and macroscopic, and causes your neighbors to want to murder you. Please don't use leaf-blowers. I digress. I just really hate leaf blowers.)


At first I worried, moving to the midwest about starting my own garbage garden in the rural Northwoods of Wisconsin. What of the wild animals, the legendary raccoons? Well, what about them? They come. The eat some of the compost. They leave. So what? It hasn't been a problem.


Some people don't know the value of their own trash.
I didn't know what to say to my wasteful hostess who generously invited us for Thanksgiving. She had worked hard to prepare the food she just threw away. I didn't want to seem ungrateful. I stayed quiet but was screaming on the inside. It felt like I had witnessed a crime.


I tried to see things her way. I knew from past interactions that she felt that leftovers, as a general concept, became magically, instantly toxic. She tossed them out, as if our inability to eat them caused them to cross some invisible barrier upon which they became radioactive. (Curiously, an exception to her rule was leftover dessert, which she saved; a logical inconsistency.) When we dined at restaurants, a server asking if she wanted to take the entire uneaten half of a whole pizza home would be given her shocked look, as if they were asking if she would like some barbecued baby brains for dessert. So I should not have been surprised to watch her feeding her trash can the remains of our Thanksgiving feast.


The second time she invited us to Thanksgiving, I became sick with worry that I would have to watch the same crime all over again. I actually lost sleep worrying over it. I finally gathered my courage, and asked her beforehand if I could please, please take leftovers home that she would otherwise throw away, including the remains of the turkey. Saving the leftovers was important to me as a spiritual concept. Plus, we had a dying cat who had lost her appetite. Surely some real turkey meat would be a good temptation for her to eat again.


Our hostess gave me the sort of alarmed expression you give someone who requests to perform a Satanic ritual, but agreed. It did help for me to explain that the turkey meat was for our cat whose bony body was being eaten alive by cancer. But several times during the Thanksgiving meal she wrinkled her nose and announced to everyone with an amazed tone, "I'm saving the CARCASS for Holly!" I felt myself cringing, wanting to disappear into the depths of my chair. (Crazy, Holly, saving CARCASSES! Next thing you know I'll be digging up bodies and grinding up bones for cake mix!)


I think she was trying to make sense of my bizarre behavior. We just came from different universes where leftovers were concerned. I swallowed my embarrassment and took the carefully wrapped and iced CARCASS home to help feed our dying cat. Our cat loved the turkey meat. I am so glad that I stood my ground.

What do you do to use what you have?

Are you able to give leftovers to people or animals that can use them?