What's the Opposite of Hangry?

I don't like feeling hungry. This is why the inside of my car looks like a squirrel exploded. Each time I raid my emergency bags of peanuts in the shell, I try to be neat, but particles diffuse along a steep concentration gradient. Peanuts kill my hunger like nothing else. I am sure other people have their magic bullets, but for me, it's peanuts. Sure, it would be faster for me to eat shelled peanuts, but I love the built-in tactile reward of the shell removal process. Tim rolls his eyes at me each time I vow, after cleaning my car, never to turn it into a rolling nut processing facility, again. It's never long before my next road emergency. 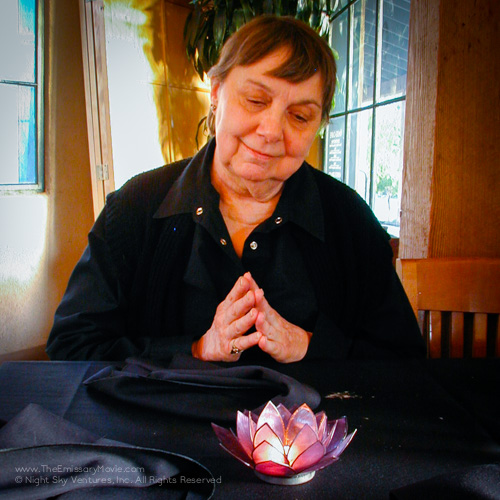 Tim's late mother Diane, after dining at the Oasis Cafe in Salt Lake City, the place where Tim and Holly had their first blind date

What I hate more than being hungry is being hangry. This is what happens if you let hunger drag on for too long. You turn into a crazy person. My IQ drops to Frankenstein levels, I feel panicky, I can't focus on my work. When I get hangry, I keep my mouth shut because I sense I might regret what I say, later.

Tim, who is truly one of the kindest persons I have known in my life, turns into this man that I do not know, when he is hangry. Who is this jerk? I think. He demands I funnel food into him, he doesn't care what, and NOW. He looks angry and wild. "I am having chemicals!" he would jokingly explain, in the middle of one of these attacks, when we first started dating. That was his invented phrase for hanger. Some sort of hungry-angry chemicals were circulating in his blood, he said, thus he thought he was "having chemicals". This phrase still makes us laugh because of course, everything is made of chemicals, so it is just a silly thing to say. But it feels true. In fact there are genuine hangry molecules like ghrelin, and who knows what else.

Tim marvels at how something as simple as hunger can alter his mood. "If I were hangry all the time, I would be some sort of criminal," he says, wonderingly, then going on to voice sympathy for whatever simple biochemical switch, stuck in the on position, might land certain people in jail. He reasons that "the angry monkeys were the ones that survived, because they got the food." The polite ones, that did not get hangry, politely starved to death, depriving the world of their hanger-resistant babies. So our hangry gene lives on. It's just trying to keep us alive. It is also uncomfortable and inconvenient.

So I try to keep healthy snacks around to keep myself from entering the Hangry Zone, and make notes of what foods work for me and what doesn't. Some foods seem to evaporate from my consciousness after eating them, you may as well eat air for all they do for your satiety. Sellers of nutrition and diet books may try to convince you that they know what these are, but we are all so complex, even our gut flora differs dramatically, that I think you have to experiment and figure it out for yourself. Take notes. That's an act of mindfulness right there.

One problem with letting yourself get hangry is that you overeat in compensation. I think that this is because your brain is still reliving the shock of being hungry, even when you are full. When I have a hard morning workout, I am more likely to get a hangry attack in the afternoon:

It was horrible! my brain cries, as I start eating my third afternoon snack. There I was, starving! I thought I was going to die! To avoid stuffing myself to the point of discomfort and spoiling my appetite for dinner, which I love sharing with Tim, I've learned to slow down, pacing myself by leaving half my snack uneaten, doing a few chores, then checking in with my body before I decide to finish it.

I talk back to my alarmed brain, There there, you are not really hungry any more, are you? Why don't you ask the belly how it feels? Would you like some water? Coffee? Look, a unicorn! I try to distract it, to give it time to calm down. Even if I am not hungry, it takes time for the brain's alarm system to step down from Red Alert once you get into hangry zone.

There is no survival payoff for focusing on how full and content you are.

Negative bias is our evolved tendency to pay greater attention to threats than rewards. It's all about our distorted view of sticks and carrots, punishment and rewards. Sticks always appear bigger than their actual size, in the mirror of our mind. Fearing imaginary sticks keeps you alive, relishing real carrots does not. There is an evolutionary payoff for getting hangry. I'm curious about how to turn this around, to a more realistic sense of the state of our bodies. It takes work, because of our negativity bias.

And the opposite of hangry is...?
Ever notice a point during the day when you are NOT hungry? Most of the time we are not hungry. What a shame we habituate to that and forget to feel grateful for our contented selves. I think it's time to pay close attention to the opposite of feeling hungry. If you can think of a word for words like satisfied-happy-full, let me know! One friend suggested contentful. I welcome suggestions. It's the opposite of hangry.

Well, I have been deliberately trying to feel gratitude for a happy belly, when it tells me that is happy, that is, for a few years now. I have a theory that if I mentally reinforce the awareness of genuine, grateful satiety, it will last longer. It is the rest-and-digest parasympathetic nervous system that you are tuning into, when you listen to your digestion.

You are reinforcing a circuit from the more primitive hypothalamus to the emotional midbrain and higher, cortical regions of your brain, to the gut and back, when you practice this. It's exercise! My digestion gets upset easily, so I have years of practice tuning into it anyway (Hey, what's going down there! Knock it off!) and this practice helps keep it on an even keel. It's not a magic bullet, but it helps.

So right after eating, I try to remember to tune into the sense of satisfaction from the meal. (Yay! Happy belly!) Even something as simple as the wonderful bitter bite of coffee that lingers in my mouth, I will really focus on that. Here, I am telling my brain. These signals mean I just ate, and it feels great. LOOK at that. The memory of having eaten is getting reinforced. I wonder if this prevents a hunger attack later? In any case, it is a form of gratitude, and feels good.

A study published in Science  addressed imagination and desire for a specific food. Researchers from Carnegie Mellon asked people to imagine eating not just one M&M candy, but thirty, slowly, one after another. You would think, this would take some mental work: twenty five, twenty six, twenty seven... After eating imaginary candy number twenty-nine, the participants must have thought, oh  god, not another one. Because they did not want as many real candies as people who visualized inserting 30 coins in a slot, as a control, after the visualization session. They were mentally "full". Apparently you can habituate yourself to a stimulus just by imagining it to exhaustion. I am not suggesting you imagine eating thirty candies one after the other, but focusing on real gratitude for a meal you just ate might accomplish something similar. The memory of your meal may linger longer.

Breakfast, like time, is an illusion
Douglas Adams wrote, "Time is an illusion. Lunchtime, doubly so."
Being mindful of whether or not you actually need breakfast is the guide you should go by. Not the food industry. You see all those advertisements proclaiming that eating breakfast helps people lose weight? Half the data really support that! Half the data really don't ! Without cherry picking the data, you see the answer can go either way. I think it depends on the individual, and also varies with a single person, depending on their state. Guess which side the food industry wants you to believe? Should you eat breakfast? Well, are you hungry? Listen to your gut. If you are hungry, eat. If not, wait, and be prepared to have an extra early lunch if it does.

Rate your hunger-fullness on a scale

One mindfulness practice that works well for a lot of folks is to rate how hungry you are, at different points during the day. Some people keep a food log, and there are lots of increasingly sophisticated websites and apps that will help you do this, many are free. Some break down how much nutrients of different types you are getting or not getting. I occasionally do this to monitor what might be upsetting my digestion, if it is a mystery, and it's always informative. A simpler version of this is to simply rate your hunger (or in my case, indigestion) at different points during the day. I don't question when I am hungry, I KNOW. But we don't pay so much attention to when we are not, and my point here is that I think we should.

Of course there are times when I think of food, but am not hungry. I think that's fine, too. There is a difference between gut hunger and mind hunger, and that is the topic of another column. In short, both should be respected, but it helps to distinguish between the two. Eating as a form of protection against future hunger, or just to enjoy something, can be both sensible, and fun! You can rate yourself, on a scale from 1 to 10, with 1 being panicky empty oh my god I will die starving, and 10 being the ow ow I ate so much it hurts. When you are good, somewhere in the middle, it feels great to really focus on that, with a conscious sense of gratitude. Full! Happy!

What would satisfy me most?
I regard our composer, Vince Frates, as not just a wise guy, because he is damn funny, but a covert wise man. That's because he has a knack for casually mentioning something he does, that I consider wise, and his ideas slip into my mind as lifestyle changes that stick with me for years. Several years ago he said, he found it helpful, before eating, to ask yourself, what would be most satisfying? Something hot? cold? Soft? Crunchy? Savory? Sweet? or my favorite, Umami? and so on. Good idea! I still do this before I eat. If you get it right the first time, you feel more satisfied. You want to satisfy your mind-hunger as well as your belly-hunger. And when you pay attention to mind-satisfaction, I think that you reinforce that circuit.

Pay attention to hunger
I try to sense hunger before it turns to hangry, and nip it in the bud. I take notes to prevent this. My hunger peaks in the afternoon and, strangely, even though I fast all night long when I sleep, is lowest when I wake up. I marvel at the mysterious cycling biochemistry that must underlie this process. How can it be that I go all night, for hours, without eating, and feel fine, but half an hour after lunch, I am hungry again? I trust my body knows what it needs, though.